In the entertainment industry, many jobs are kept tight-lipped for several reasons.  The producers do not want any talent to reveal any details if it’s a juicy weekly show, a talent on set may have something drastic, dreadful or incredible happen to them and they do not want anything leaked out to the public or even your best 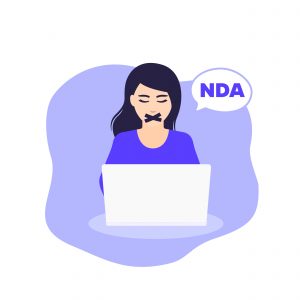 buddy, the show may be transforming to another series or platform and any possible reveal could ruin the whole production.  If this happens, the costs are staggering to re-shoot because of the irresponsible actions of a careless talent.

When you are part of any production, assume you are not to discuss it without approval from the producers.  When you are part of a production and you sign an NDA, read the NDA to fully comprehend it’s meaning.  If you do not understand it, hire a legal entity to decipher it so you do not lose your role in said production. If the NDA doesn’t give a release date, assume the NDA is forever.  Yes, I said forever.

When on set, never take photos, record any scenes, scripts or listen in on confidential discussions going on.  Your job is to be the actor and portray the role you were selected to be.  Remember, on some sets, phones and devices are confiscated so they cannot be used at all.  Never post on social media or tell friends/relatives in any communication about what role you had and what you did on set.  This could come back to the producers retracting you from the production and paying thousands of dollars to re-shoot the scene with a different script for all the other actors to work again because you were a blabbermouth.

The NDA’s are not only for actors, other talent in the entertainment industry like models, voice over talent and other entertainers are required to legally sign their confidentiality for various projects.  These projects could be new brands, government projects, new laws, new products and new technology and video games to name a few.

At Impressive Talent, we take NDA’s seriously. Breaking your NDA could result in immediate removal from our roster, not to mention the talent ending up in court potentially being sued for breaking their signed legal agreement and having to pay restitution  for showing off

Next time you sign an NDA, please take it to heart.  A professional talent doesn’t need to flaunt their experiences, their resume does it for them.  For any NDA signed project, list it like this on your resume:

That’s all you can give away, and even mentioning the production network could be risky, again, refer to your NDA to verify you are even allowed to share the network, or brand name of said project.  Being a hotshot is not worth losing the job.  Any job has potential for repeat business.  Act like a professional, follow directions and stick to your commitments.